Anyone who knows me is aware that I have been attending film premieres in London ever since I moved to London in 2007.

Well, when I say attending film premieres I mean I have been at the red carpet barrier taking photos. There have been hundreds of competitions and chances to walk the carpet and watch the film, and I have never won any of them.

Until this weekend! I entered a competition on Instagram ( @amzh87 fyi) through Universal Studios and won two tickets to the UK premiere of The Danish Girl.

On my way to work I passed by Leicester Square where some of my lovely Redmayniac friends were waiting to go on the barrier. I met this amazing bunch three years ago at the Les Miserables premiere and we have stayed in touch, doing premieres and the BAFTAS ever since.

We were actually lucky enough that between us we all had won enough competitions so we could all go in and watch the movie together.

Eddie knows his troop and always finds them on the carpet!

After work I headed back to Leicester Square and grabbed a bit of barrier to watch the arrivals till the girls were ready to head in.

Eddie arrived very quickly and worked the tartan suit like a pro!

Seriously, that tartan was a sight to behold!

You can see my friends in the background! He soon spotted them and headed over…

As usual, Eddie was his charming self and seemed so happy to see them! Watching him spot them across the carpet was very funny, he literally bounced over to see them. Pictures were taken and presents were given.
Once the ladies were ready to head in we hit the carpet. It was a tad surreal actually stepping on it after all these years. 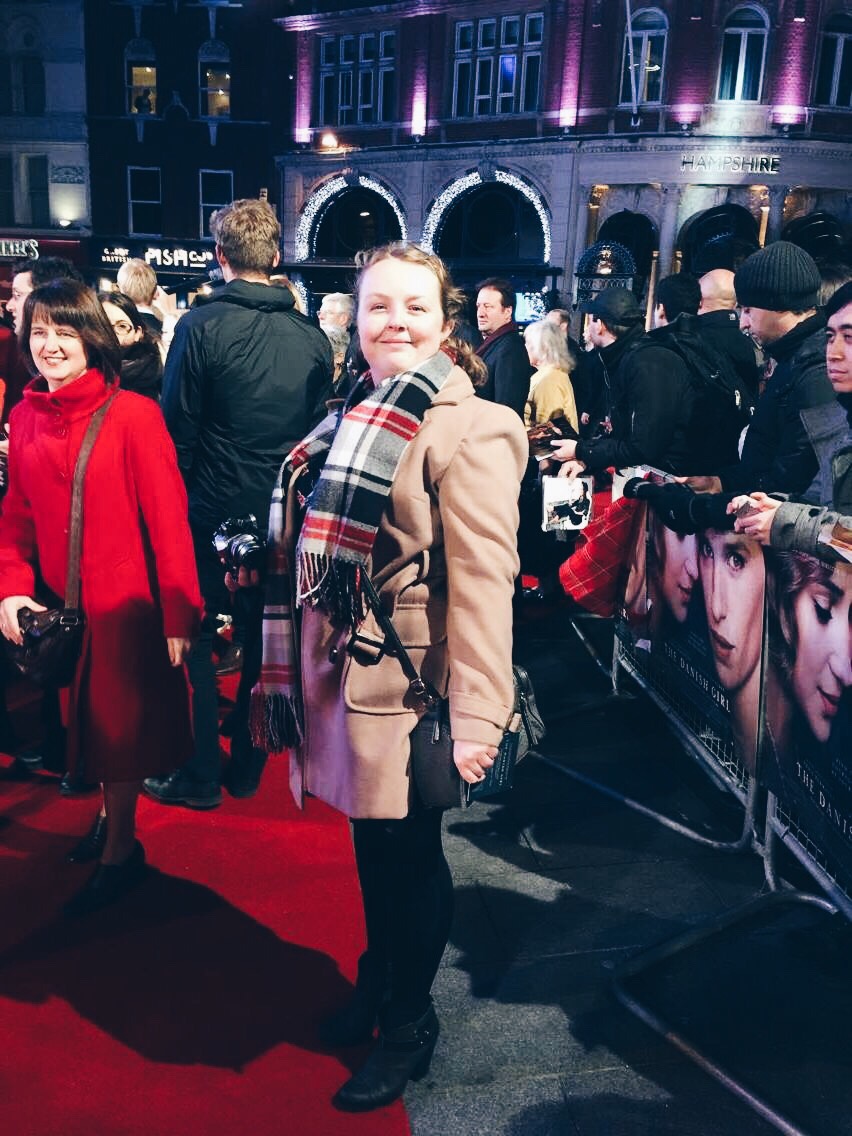 I am wearing ALL the layers. It was very cold.

Tracy was also wearing all the layers.

Feet on the carpet!

It was a very crowded carpet and we were moved along it quite fast. But not before taking a few pictures. I wanted to make it last as long as possible, just in case it’s another seven years before I get to do it again.

Once in the cinema we had a good catch up over a glass of wine, before heading to the seats to watch the film.

The director Tom Hooper came on stage to introduce some of the important people that helped create this film. It was very inspiring to hear how passionate he was about this film, Lili and her life, as well as how honest he was about the film industry and the struggle to get in.

The film itself is beautiful and very moving, telling the real-life story of Lili Elba and her struggle to be accepted, resulting in the first sex reassignment surgery. Whilst Redmayne was very good, I personally think Alica Vikander was amazing in her portrayal of Einar Wegener’s wife Gerda, and she is definitely an actress I will be looking out for in the future. As I write this blog, both Redmayne and Vikander have received Screen Actors Guild nominations for best actors in their respective categories. Whilst I don’t think this is Redmayne’s strongest work I really hope that this film helps Vikander get the attention she deserves from this role.

I really enjoyed this film and would recommend it, even if it’s just to learn what this amazing strong beautiful woman went through just to be herself.

One thought on “The Danish Girl Premiere- Blogmas Day 9. ”