Crossing town from Charing Cross to Kings Cross St Pancras sounds like an easy journey, but when you are in a rush lugging a huge suitcase and it’s the school holidays, it seems like a right battle. But battle across town I did, to catch the (delayed and overcrowded) 8.30 train to Nottingham. Going to Kings Cross always makes me want to hop on the Eurostar to France, but it wasn’t to be that day (but it was a few days later !!)

I was born in Nottingham and spend the first 10 years of my life growing up there and getting lost in fields before relocating to Norfolk in 1997. All my family still live in and around the area, and a family wedding was the reason for my trip up north. I figured that whilst I was heading that way, why not take a bit of time to explore places from my childhood.

Two cans of awful gin and tonic and a super crowded train later I arrived at The St James Hotel. It was a cute little boutique hotel right in the centre of town which was brilliant for exploring without getting lost. The room I had was marketed to the solo traveller, so had a reduced cost and was of a smaller size. The bed was really comfortable and the room, though very small, didn’t get too hot or cold. The bathroom was a perfect size for one, and still gave me plenty of space to get ready for the wedding on Saturday morning. I arrived quite late to the hotel on the Thursday so after a cup of hotel hot chocolate ( which always tastes nicer than the stuff you buy at supermarkets) I crashed in bed.

I woke up to a wet and miserable Friday, tried out the shower and then went off into the city in search of breakfast. After breakfast at Bills, which was not photographed because I was that hungry it didn’t last five minuets, I wandered off to explore.

I spent a few hours wandering around the shops, just to see what had changed, and what I could remember. Then I headed up Castle Rock to Nottingham Castle. In its heyday it was often used as Royal residence, but was destroyed, rebuilt as a mansion and then burnt down before being rebuilt into what stands today. If you look carefully you can see aspects of the original buildings spotted around, and because of it’s connections to royalty its history has been heavily documented. When it was rebuilt last it was turned into a museum and gallery which I spent a good couple of hours exploring.

With Nottingham’s connections to a certain outlaw, there is a nice section aimed at kids telling the story of Robin Hood, with fancy dress and everything! Sadly as I was on my own and have no kids, I didn’t get to play as much as I wanted to ( it would have been a tad weird ) so I read what I did before going off for a tour of the caves.

The rock the castle is built on has impressive cave systems underneath that you can go on guided tours of both at the castle and further in town, which I took full advantage of on this wet day. The man who lead our tour was a very funny character who definitely knew his history and told lots of funny anecdotes while he lead us through the caves. The tour took approximately 45 minuets, and I would definitely recommend sturdy shoes, as these caves are, well, caves carved in sandstone so the surface can get a little uneven. It also gets a tad chilly down there too, which makes sense as it’s where they used to keep their food and wine, as well as sneaking murderers and lovers into the castle. But I shall let the guide tell you those tales!

The tour ends at Ye Olde Trip To Jerusalem, The oldest Inn in England, where they do a fab pint and fish finger sandwich! Whilst the front of the pub is a building, it also moves back into the caves creating an extremely cool place to have a bite to eat. Keep an eye out for a ship ornament that has never been cleaned because it supposed to be haunted!

Many cities in the Midlands claim to be where Robin Hood and his Merry Men originate from, but I ( along with many people)  will always be of the belief that Robin Hood was from Nottingham, and that his home was Sherwood Forest. This statue is one of the things that I actually remember from my childhood, so it was nice to see it again.

As I knew I had a long day ahead of me on the Saturday, I spent the evening watching The Man From U.N.C.L.E, which was a surprisingly good film, before heading back to the hotel and having a soak and a glass or two of wine.

After the soggiest of Fridays, Saturday was perfect wedding weather. The skies were clear and the sun dried everything off. My cousin and his wife got married in a beautiful little church in Beeston, and then we danced the night away nearby! I don’t see my family often enough, and it was so nice to see everyone and have a catch up whilst being part of such a special and beautiful day! 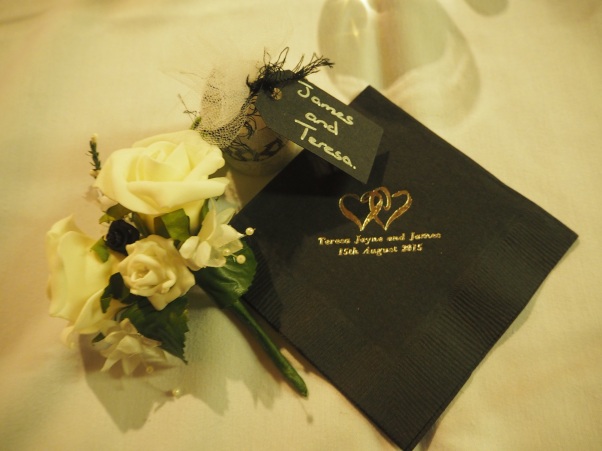 I hope I have tempted you to visit my home town! Maybe on a drier day mind you.