Okay, so I have been in Norfolk-land for pretty much 2 weeks (minus last weekend when I was in London BBQ-ing and handing in essays of DOOM)…. and the verdict.

I AM BORED!
I knew this would happen, it always does. Which is why I am always loathe to come back here.
So I am job-hunting, reading and watching American TV shows.
So you are going to get an odd *flashback* blog.
I read all the extra chapters in A Writers Tale, about Doctor Who, and one of the chapters reflected a really interesting part of my life, which also made me go back and read my old blog.
In December 2009, as many of you know, I was FOH on the RSC’s Hamlet, with David Tennant and Proff Xavi- um, I mean Patrick Stewart. The chapters in AWT, where they are exchanging emails and mention all the drama about him hurting his back, really made me think back on that month. I remember saying ‘your joking right’ when I first was told. I remember audience members getting angry, demanding refunds, or, in some chances, being relieved that he wasn’t on. I remember feeling SO tense for his understudy ( the lovely Ed Bennet).
New year came and went and we were of the opinion that he wasn’t going to come back but then one friday I aimlessly wandered into the auditorium as usual, to find him rehearsing. We still weren’t told that it was definite, and it was just to see how he was. Ed went on as usual, and so we just assumed no.
The Saturday was already going to be an interesting day as they were announcing the new Doctor (Matt Smith – yey) so we were all a tad nervy. Once again I walked into the auditorium whilst they were doing the warm up, and low and behold, hiding at the back was DT. It was only confirmed about half an hour before curtain up that he was, and we were not allowed to announce it, but took the understudy signs down, and if anyone asked, told them that, yes, he was back. I remember my friend, Nicola, who had seen his last show before he went off was in that night as well, so she was going to be rather happy.
The cheer that went up when it was announced he was back was jaw dropping, like something at a football match. He carried the whole show, and completed the rest of the week.
Random memories from the last night include them smuggling DT and Georgia Moffet in through a side door right next to where I was sitting, which made me jump about a foot in the air. Standing at the bar with DT on one side and Patrick Stewart on the other and my friend just saying ‘this is a bit weird’ isn’t it. Shaking hands with PS, and finally getting the guts to talk to DT, shaking his hand and pretty much running away afterwards lol.
I met amazing people during the whole RSC season and had some fun adventures with them, such as wEDnesday and Haaawkman.
I love how one chapter in a book can make me think back about, lets face it, a rather important time in my life. I am glad it did.
I am now going to look back at the wEDnesday pictures.
And watch Hamlet.
xx 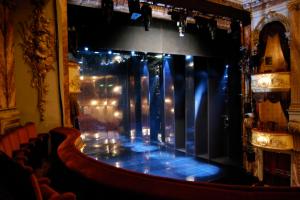