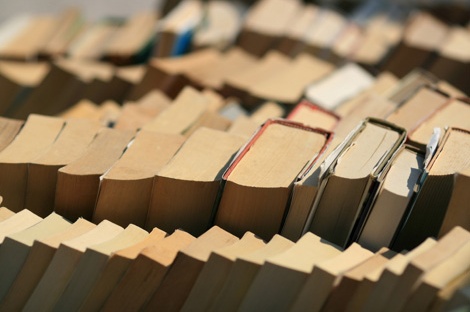 To say I read a lot as a child would be the understatement of the century. To be honest, nothing much has changed now either.

My parents would hate going into the city with me because I would always spend hours in book shops, or disappear into corners of dusty charity shops for a 50p bargain.

It goes without saying that Harry Potter was a huge part of my childhood. I got hooked on the second book, and from then on it was midnight releases all the way. ( Again – poor parents!) Once I had it in my hands I would read it all in one go, occasionally bringing it downstairs to socialise for a while, before scurrying back up to my room to deal with whatever death JK Rowling had thrown at me.

But other than JK Rowling the three main authors that I can still re-read today again and again are Meg Cabot of Princess Diaries fame, Eoin Colfer, author of the Artemis Fowl Series and Catherine Fisher, a welsh fantasy writer who wrote my favourite series of all time – The Snow-Walker Trilogy.

Let’s start with Meg Cabot, who is the reason I am writing this post. This summer she is releasing a new book for adults in her Princess Diaries series – A Royal Wedding. This is a smart move, as most of her readers who grew up with Princess Mia are now “grown up” (pah), and whilst they would have had no issue reading another teen diary, it’s kinda nice that Mia has grown up too.

What I loved about Mia was that she was so relatable growing up – even thought she was a princess. Because of the diary entry style you really got to know her, and understand her thought process. The drama that she went through was often what brought her back down to earth, realising that no matter who you are, be it a Princess or regular teenager, you all go through the same problems – it’s how you deal with it that makes the person.

I would still recommend these books to teenagers now – whilst they may not get the Buffy references, anything that gets them watching BTVS is worth reading! If they liked the Princess Diaries films, even though they are a little different  – They will LOVE the books!

The second author I mentioned was Eoin Colfer. Same as the Princess Diaries I caught the Artemis Fowl series pretty early in the run, I found myself eagerly awaiting the second book after I found the first in my local library. As a lover of ongoing series it alway made me despair that our post was always delivered at lunch time so I would often have to wait till I got home from school to start reading them. OR god forbid, that little red slip that said we tried to deliver your parcel but you weren’t in – Then I would have to wait till MONDAY!

What I loved about Artemis Fowl were the characters. From the moment I started reading it, I loved Holly Short. She was a strong female character that had worked hard to get where she was. She was honest and sarcastic and took no sh#*t from anyone. Even when she was kidnapped by a 12-year-old mastermind.

For me, this series appealed to my love of fantasy, with the added bonus of the spy/thriller genre. This series is brilliant for both young boys and girls, it touches on a lot of serious topics without losing its sense of fun – and danger!

“Twelve-year-old villain, Artemis Fowl, is the most ingenious criminal mastermind in history. His bold and daring plan is to hold a leprechaun to ransom. But he’s taking on more than he bargained for when he kidnaps Captain Holly Short of the LEPrecon (Lower Elements Police Reconnaissance Unit). For a start, leprechaun technology is more advanced than our own. Add to that the fact that Holly is a true heroine and that her senior officer Commander Root will stop at nothing to get her back and you’ve got the mother of all sieges brewing!”-

As with the Princess Diaries – I had the added bonus of “growing up” with these characters, each year as the next book was released. This is something that I feel new readers to this series will lose, but it won’t detract from the enjoyable aspect of the stories Colfer writes.

Catherine Fisher was an author I discovered in my local library, tucked away in a corner. I actually found her series The Book Of The Crow first and read those as each one was released. Whilst I was waiting I looked into other books she had written.

Her stories really attracted me, she worked a lot with old English folk law, weaving it into modern or other-worldly settings. Eventually, I came across The Snow-Walkers Son. A small little book – only 160 pages long. I read it all immediately. It’s still quite vivid in my memories, how I sat down on my bed and just didn’t move for a few hours. I then persuaded my poor mum to drive me to The Norfolk Childrens Book Centre, where, to my dismay, they didn’t have the sequel. All three had already been released, but it was so difficult to track them down. Eventually, I found them through the library inter loan system and renewed them for at least 6 months until I managed to track down used copies of my own.

“From the swirling mists and icy realms beyond the edge of the world came the Snow-walker Gudrun – to rule the Jarl’s people with fear and sorcery. No sword is a match for her rune-magic and it seems the land may never be free from her tyranny. But there is a small band of outlaws determined to defeat Gudrun and restore the rightful Jarl. This trilogy follows their quest from the first terrifying journey to meet the mysterious Snow-walker’s son, to the final battle in the land of the soul thieves.”

Thankfully now they are all available in one book, that is much easier to get a hold of. I have 2 copies of it, as well as a hardback signed edition, even though I have sadly yet to meet her. All her books are suitable for young teens and adults, I actually find the mythology aspect of her work more interesting when re-reading as an adult. And there is no love triangle shoved down your throat like there often is with teen fiction today. It’s not that I don’t enjoy a good bit of romance, but sometimes it can feel so forced. (That can also be said for Artemis Fowl too.)

So there you go – a little tour down book memory lane! I was looking for a post that I could write that would help you guys to get to know me a little better and that would help me practice my writing more too. I know a lot of people have read these books so it’s nothing new, it’s just something that I wanted to write as it is something I am very interested in, Hopefully, I can get around to writing some book reviews soon on new publications.

Also – FYI – if you are ever in North Norfolk – go to the Norfolk Childrens Book Centre- it’s heaven!