When I rolled out of my cocoon on day two I was fully expecting to be the biggest ball of ache known to mankind.

But all was good!!

(sometimes I forget that I cycle or walk 6 miles a day, 5 days a week, I am healthier than I think I am)

I decided on an early start so I could take my time and dawdle to my hearts content. I had had a fairly early night in the grand scheme of things so had plenty of sleep. The camp bed is such a cozy thing it was hard to get out.

I shuffled out of the campsite at 7:30 with just my backpack on my back.

Leaving the tent and my things behind.

It was such an odd feeling just up and walking out – I felt like I had forgotten to do something.

But magic was about to happen….

My tent was magically going to transport itself 14 miles down the coast!

I just had to walk it – and not get lost doing so.

Across from Burnham Deepdale to Burnham Overy Staithe.

I made my way back to the Coast Path, and followed another stunning section from Burnham Deepdale to the beautiful town of Burnham Overy Staithe.

It was here that I sat, ate my breakfast and watched the dog walkers start their day from the little car park.   Breakfast may or may not have been the delicious cake that was waiting for me when I first arrived at my tent the day before. I also borrowed the Tupperware it came in….

Sitting there you could hear the sails clinking against their masts in the breeze. It was such a tranquil spot for cake.

It was also the last loo till Holkham, so a nervous wee was had! 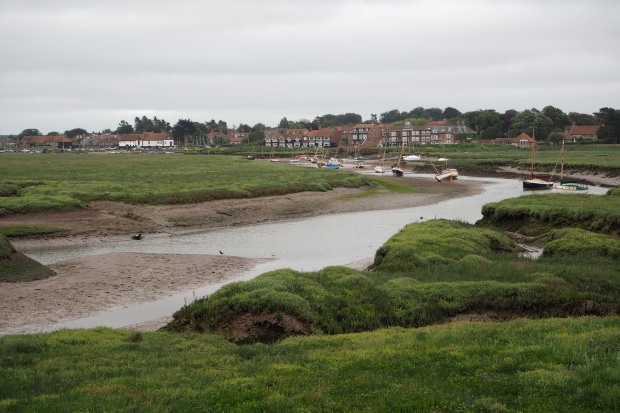 I don’t think I can find the words to actually describe the view once you make it up and over the dunes walking onto Holkham beach.

I have never seen such open space!

A guy I had been walking the last section of the path with told me he does this every day and it never gets old.

His dog flew off down to the sea having the best time ever! 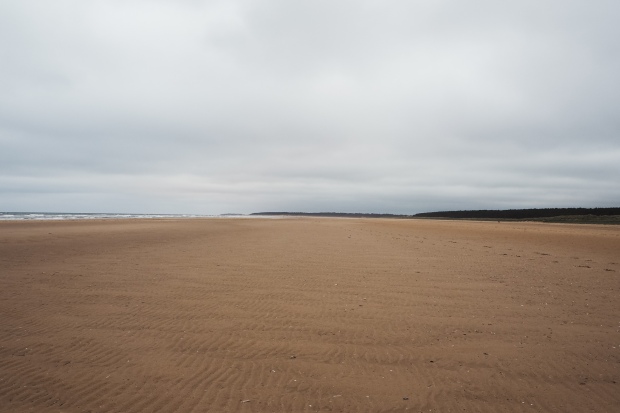 Sure it was grey and the wind was whipping down the coast but the sheer expanse of it all was just amazing. Miles and miles of beach. I imagine even in the summer it feels uncrowded. No picture could do this place justice.

There are a couple of route options on this stretch, you can walk along the dunes in the shade of the trees, or you can be an absolute child like me and walk along the beach – picking up shells along the way!

And there were so many shells littering the beach. It must be a kids dream. I know I was picking up ones that took my fancy ( I brought a few home with me – shhh)

It was this beach that added just a *few* extra steps to my journey, and at least an extra hour. But that hour was so worth it. I am gutted that I missed the Household Cavalry by just a week, but that gives me one more reason to come back.

One thing I had noticed up until this point was the lack of litter on this walk. That was up until Holkham. Along with some bottles and caps, I picked up two birthday balloons. One thing no one told me about beach cleans is how much they SMELL!! I don’t know if it’s just helium balloons in particular but they stunk so much that I had to keep my empty bag outside the tent each night, worried I’d made it smell. (I also had to leave the bag outside my house and let the rain rinse it when I got home!)

I don’t know how much more people can say “don’t litter” until people actually listen!

Once I got off the beach, I found Holkham Lookout – the new visitor centre for the beach and nature reserve.

This meant it was time for a toilet break!!

Free cold water, a good coffee shop and binoculars you could borrow to see the birds and other wildlife. (They were good too) This visitor centre opened in 2018 and makes the wildlife accessible to all visitors who might not be able to explore far, or afford expensive equipment. Its a good place to stop and have a break before heading into Wells for a good meal. 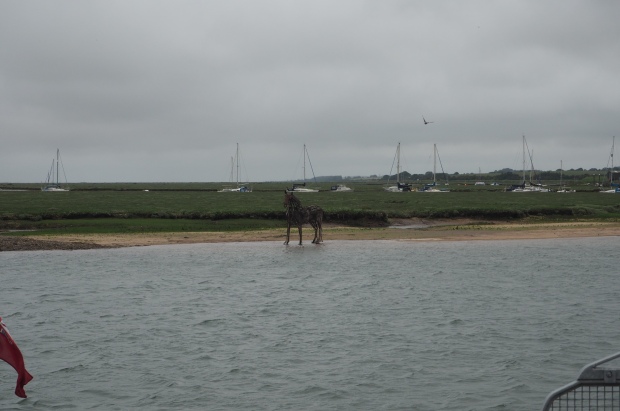 The Lifeboat Horse sculpture at Wells-next-the-Sea

Walking from Holkham to Wells – next – the- Sea is a lovely shaded route that leads you to the bottom of the harbour. This next section is full of childhood memories for me. Summer holidays spent Crab fishing. Fish and chips. Arcades. Donuts ( which I couldn’t find any of! Apparently its still off season so they only do them at weekends) 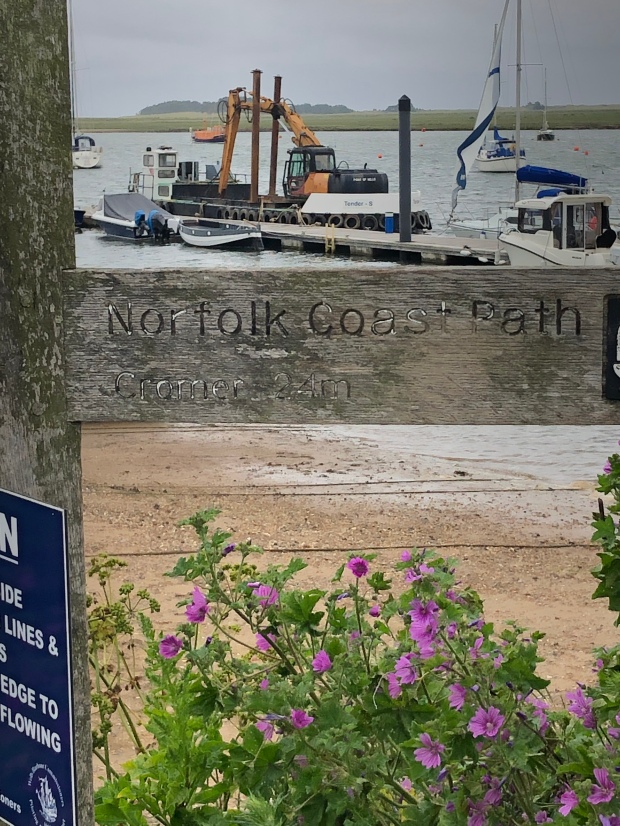 I stopped off at Wells Deli for a massive mug of tea and a toastie. And I will definitely make plans to come back to The Albatross – a Dutch Cargo ship bobbing in the harbour for pancakes.

The final MILE mile stretch to Stiffkey is another isolated section, where I barely saw a soul. But much the same as the day before I never felt unsafe. It was impossible to get lost on this section as it was a single track that lead directly to the campsite, where I could see Samphire waiting in all her glory!

Stiffkey campsite looks out over the salt marshes, and weather dependant ( or rather wind dependent) your tent elf will set up your tent with incredible views over them.  Upon arrival I sat down, put the kettle on and just looked out onto the marshes.

Remember what I said about stretching. I failed at that again.

SERIOUSLY – DO WHAT GIN RECCOMENDS!!

She knows what she is talking about!

Safe to say both my legs seized up to the point where standing up was difficult. I hobbled over to the shower block, a more traditional campsite set up, but immaculate and plenty of stalls. Here the hot water warmed me up enough that I felt able to shuffle on down to the local pub. One massive burger and fries later and my body was done.

That hot water bottle was SO needed. Not because it was cold…. but because my muscles gave up!

I followed the pathway back to the campsite, watched the sunset over the salt marsh and crawled into bed. I was slightly concerned that I might have difficulties with tomorrows walk, but as I had a slow start to the day planned, I hoped that this would be enough to get me going.

Come back in a few days for seals, shingle and Sheringham’s mountainous golf course! 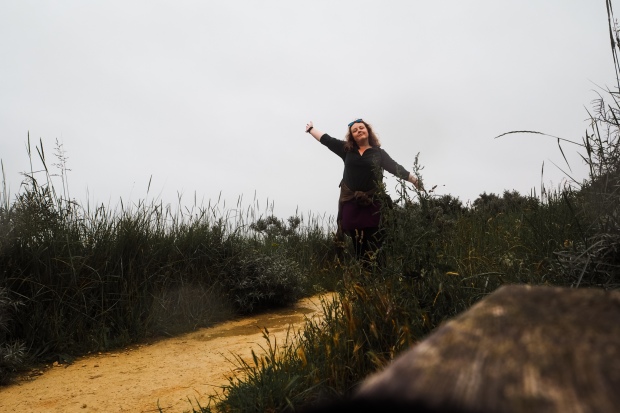 taking photos of yourself on timer……. the only solo travel woe!