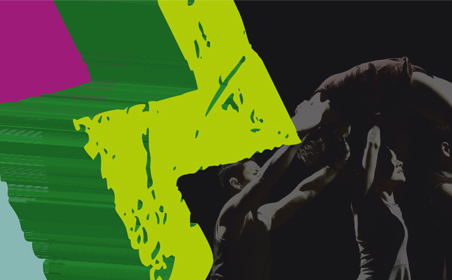 Confusingly the first production I saw at this years Norfolk and Norwich Festival was a show called Grand Finale at the Norwich Theatre Royal.

As with last years Norfolk and Norwich Festival I try and see an eclectic mixture of productions, partly to keep the blog interesting, but mainly to keep taking me out of my comfort zone with shows that I see. ( and maybe inspire people to see things they wouldn’t normally see)

I have never reviewed dance, but I have MANY thoughts after last nights moving performance, so bare with me whilst I try and write something that will do it justice.

The Hofesh Shechter Company was last part of The Norfolk and Norwich Festival in 2015, with the show “Political Mother” and returns this year with a company of 10 dancers and 6 musicians. Shechter is a world renown choreographer and composer, creating work that has toured the world, as well as working with The Royal Court and National Theatre.

In the programme note it is mentioned that “people can often be put off dance if they feel they don’t grasp whats unfolding in front of them…” and Shechter replies “when someone sits and watches the performance, it is about what is happening to them in their head, how they feel. It doesn’t matter that they don’t get it right in some way. ” Walking into the auditorium I did feel very out of my depth, would I understand what the choreographer wanted to get across? Reading the above slightly reassured me, but it didn’t matter – as the curtain rose I got sucked into the movement and the mood of the piece instantly.

I know little about dance, but can say with confidence that this choreography was amazing. There were styles of dance incorporated from all over the world and the many flashes of different cultures added to the chaotic theme that ran throughout the piece. Shechter’ s original score was a fun mixture of thumping drum music (often rave like), traditional music from around the world recognisable classical music played by the 6 musicians on stage. We were warned on entering the auditorium that this would be a loud show. And it was.

Grand Finale shows the chaos and uncertainty that is rife in the world right now. It is at times a dark and ominous piece, but occasionally I found myself smiling at the actions of the dancers, before remembering what else was going on. I think that is very symbolic of the world we live in, getting distracted from the chaos by brief moments of light, before plunging back down into the reality of what is happening.

Each person interprets dance differently, and for me the darkness of the piece really shone through and left me with lots of thoughts. One section in particular really unnerved me, with the dancers caught in what seemed like an eternal yawn – maybe representing how we can find ourselves sleeping through life if we are not careful.

The dancers where fantastic. The choreography must have been exhausting. At times it was quite lyrical, but would suddenly become very sharp and jarring. The waltzing dead bodies section was both beautiful and yet very disturbing.

What really tied this production together for me was Tom Visser’s lighting design. Whilst the dancing would have been mesmerising on a bare stage, the lighting design took it to a whole other level. There were moments where they were almost dancing in the dark, if not for a shaft of light that caught the right body part at just the right moment. The use of shadow and light, with a strong haze in the auditorium added to the almost apocalyptic tone of the piece. (The tech rehearsal for this show must have been very complicated, but the dancers always found there light perfectly. )

Writing about dance is not my strong point, but I hope that I managed to get across how enjoyable this show was. Sure it was dark and ominous, but there were moments of (sometimes uncomfortable) joy. Head on over to the Hofesh Shechter Company website to see if you can catch a show!

Are you seeing anything at the Norfolk and Norwich Festival this year? Let me know down in the comments, maybe we will bump into each other!